Agitate to speedy for his rivals 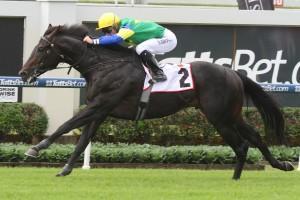 Flying galloper Agitate lived up to his reputation as the fastest barrier horse in Queensland with a blistering display of pace at Doomben on Saturday.

Agitate ($4.80) overcame the notoriously biased 1110-metre start when he jumped straight to the front and raced away to beat the favourite Havana ($2.15) by 1-1/4 lengths in the Mick Dittman Plate.

Trainer Kelly Schweida said he was in awe of Agitate’s gate speed.

“He was three lengths in front after they had gone 100 metres,” Schweida said.

“He is just too fast for them out of the boxes. I talk to veterans and none can remember a horse which goes so fast out of the barriers.

“I reckon he would have started at $2.50 if he had drawn barriers one to five. But really it didn’t matter today.”

Agitate was beaten at Eagle Farm last start but Schweida said the colt had improved in the fortnight since and worked well.

Schweida said jockey Glen Colless, who couldn’t ride Agitate on Saturday because of a commitment to Londehero, rated Agitate the fastest horse he has ridden out of the barriers.

Damian Browne, who rode Agitate on Saturday, was quick to agree.

“He went so fast he almost left me behind. A good thing I had my seat belt on,” Browne said.

Schweida is undecided which way he will go with Agitate but the Listed Chief de Beers Handicap (1100m) at Doomben on May 24 is an option.

Agitate loves Doomben where he has now won five of his eight starts.

Kerrin McEvoy, who rode Havana, said the favourite had a nice run on the fence but the winner had run him off his legs.