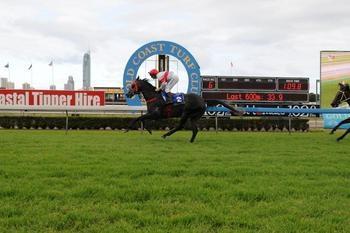 Barrassie Brother again underlined his exciting potential with a stylish win in the Hot Tomato Cup (1200m) at the Gold Coast.

The talented four-year-old resumed from a 12-week spell with a solid second at the same venue on December 15 before Barrassie Brother stripped much fitter for that outing.

The experience stood Whiteley in good stead as have gave the son of Top Marc a comfortable passage, behind the speed for the first 600 metres before Barassie Brother rolled menacingly into the $10,000 race rounding the home turn.

Barrassie Brother had plenty to give once Whiteley eased him around the leader’s heels early in the straight before the gelding put the race beyond doubt with a smart turn of foot.

Barrassie Brother coasted to the finish 2-1/4 lengths clear of his opposition to record his third win from 12 starts with all of those victories coming on the 1200-metre course at the Gold Coast.

Barrassie Brother is a rarity himself, being just one of 20 named foals sired the Glasshouse Handicap winner Top Marc.