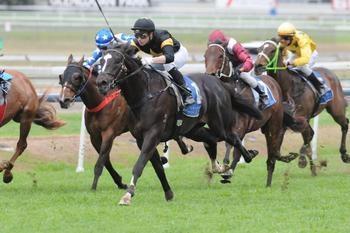 Better Than Ready has charged to victory in the Darley Australia Handicap (1110m) to begin another Doomben double for the Kelly Schweida stable at the Labour Day public holiday meeting.

Schweida prepared a double at the city venue on September 15 before Better Than Ready continued the stable’s success with his exciting win in his $50,000 assignment.

Ric McMahon had little option other than taking Better Than Ready to the back of the field after the colt drew barrier nine in the 10-horse field while the leaders set a fair speed early before slackening the tempo midrace.

McMahon pushed Better Than Ready into clear running at the 300 metres before the three-year-old unleashed a terrific sprint to swamp the leaders to post what turned out to be an easy win.

"In the first 100 metres when he was back last with 59 kilograms on his back I was a bit worried but he showed his class.

"I think the decision to take the visor off and put a cross-over noseband on him also helped because it kept his mouth shut and he settled a lot better.

"He still does a lot wrong. He can be a real knucklehead at times but the penny dropped today."

"It wasn't an overly strong race and he's never worked or looked better than he has since his last run," Schweida said.

"I thought his last run wasn't too bad and I decided to put the blinkers back on him. The jar out of the track was also in his favour today."