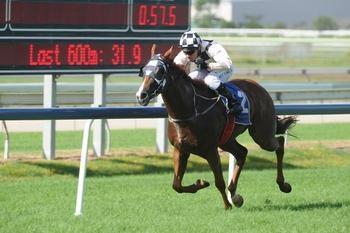 Hard Spun gelding Lennie’s Choice had no trouble completing a hat-trick of victories when successful in the Drumbeats @ Lyndhurst Class4 Handicap (1030m) at Doomben.

Lennie’s Choice broke his maiden at his second outing on January 30 but has continued to developed into one of Brisbane’s most progressive sprinters with three wins at Eagle Farm and Doomben.

Michael Cahill was aboard Lennie’s Choice again after the experienced jockey partnered the three-year-old at his previous start at Eagle Farm. Cahill adopted the same tactics on Lennie’s Choice, allowing him to stride to the front before the handy prospect led throughout to score a soft win by three-quarters of a length.

Winning trainer Kelly Schweida said the smart galloper took some work to get right but Lennie’s Choice’s natural pace made him tough to beat over short courses.

"He's got such good gate speed he's perfectly suited to these sort of races and I like winning them," Schweida said.

"The reason I'm keeping him to the short races is because he's such a clean-winded horse that I don't have to do any work with him between races."

Schweida said Lennie’s Choice showed abundant talent during his two-year-old season before a common complaint ruined his chance of racing as a juvenile.

"I thought he was going to be a really good two-year-old when he won a jump-out by five lengths," Schweida said.

"He was shin sore after that so I put him out and when I brought him back he was only in work for two weeks and his knee blew up.

"I got it X-rayed which showed he had a chip. I nearly cried."

Schweida said he would ease up on Lennie’s Choice in the immediate future before deciding his next move.

"He's only knee high to a grasshopper and I'll probably give him a little freshen up on the water walker to try and put a bit of beef on him," he said.