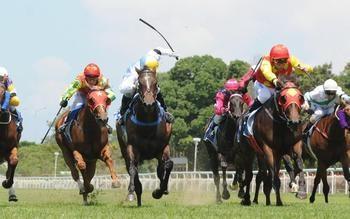 Classy filly Discreet returned to her best form with a dominant victory over older horses in the Carlton Mid Handicap (1110m) at Doomben.

The  three-year-old showed her abundant talent with her success in the Listed Calaway Gal Stakes (1000m) at Eagle Farm in December last year but luck deserted her in the ensuing 12 months.
Discreet performed solidly in terrific races during her period out of the winner's circle but  the daughter of Show A Heart bounced back in brilliant fashion at Doomben.
Leading rider Chris Munce resumed his partnership with Discreet  in the $45,000 event, giviing his mount time to balance midfield for the first half of the event before asking her to improve into the race from the 450 metres.
Munce initially had trouble finding clear running for Discreet early in the straight before the premiership-leading jockey found a passage for her at the 200 metres.
Discreet picked up quickly once clear before the filly charged home to beat Hollyweird by three quarters of a length.
Discreet earned a $28,800 winner's cheque for her efforts, taking her prizemoney tally to more than $228,000 from her 13 starts.
The filly still has the chance to secure a big payday as Discreet is still among the entries for the $1 million Magic Millions 3YO Guineas (1400m) at the Gold Coast.
Congratulations to Discreet's owners – R P Townsend, Mrs P J Townsend, R A Lindsay, W Capell, D J Maher, T W Markell, J Mead & Socks Syndicate (Mgr: C Blackett).