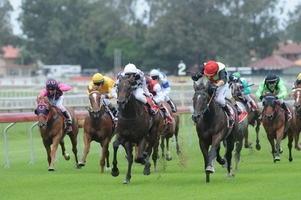 Stewards helped Eagle Farm trainer Kelly Schweida to the perfect start to 2013 when a successful protest completed a double for the stable at the New Year’s Day meeting at the Gold Coast.

Miss Bradbury steamed home from well back to fall a half-head short of Precious Mandy in the Coastal Tipper Hire Handicap (1400m) Handicap. The mares raced closely at the end of the race with Miss Bradbury’s jockey Michael Cahill lodging a protest against the result.

Stewards agreed with Cahill, awarding Miss Bradbury the race to give the grey mare her second victory in three starts. Schweida was always confident stewards would rule in his favour.

“It was a close thing, but Miss Bradbury had got to the front and two strides from the line the other mare has given us a bump which has cost us the race,’’ Schweida said.

“It’s turned out to be a pretty good day for us.’’

The son of Stromberg Carlson settled midfield while a strong tempo prevailed up front throughout the $45,000 race before the gelding charged home under jockey Jim Byrne to score by 1-1/4 lengths.

Castle Express posted his fourth win from 39 starts with his latest success taking his earnings to more than $110,000.

Congratulations to the owners of both winners.