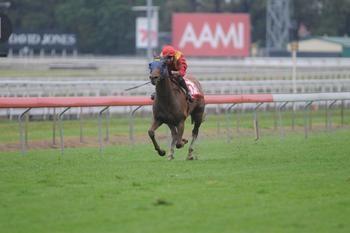 Talented mare Flying Jet posted yet another win for the Kelly Schweida stable with a terrific performance on heavy ground at Eagle Farm.

Flying Jet had run well without winning in her previous three starts on heavy ground but relished the wet ground to prevail in the Queensland Reef & Beef Plate (1400m).

The daughter of Flying Spur had also not won over the 1400-metre distance of the Eagle Farm event but broke new ground on two counts with her latest win.

Regular Larry Cassidy was in the saddle again. The experienced hoop was content to allow Flying Jet to travel at the back of the field for the first 800 metres before keeping the four-year-old to the inside of the course rounding the home turn.

Flying Jet sprinted well when in clear running to reel in the front-runners before proceeding to work clear of her opposition with 100 metres to run.

The runner-up My Quilter got within a half-length on the line but was unable to prevent Flying Jet score her fourth win from 10 starts for the Kelly Schweida stable.

Flying Jet earned another $28,000 winner’s cheque for her latest success, taking her prizemoney tally to more than $200,000 from 17 starts.