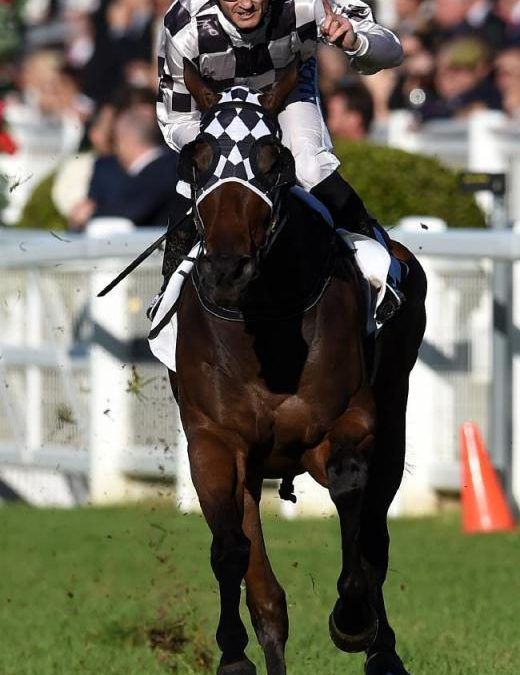 A short time later, Schweida saddled up Ruling Force for a dominant win in the Rockhampton Cup.

“It was a pretty good feeling watching on the TV,” Schweida said of Miss Cover Girl’s win. “It had been a long time between drinks and that was in the back of my mind, even when I saw she was travelling so well.

“But Browney gave her a 10 out of 10 ride and she got the job done. It was a huge thrill and then another pretty satisfying moment to win my first Rocky Cup as well.”

Tiara day was marred by the state of the new Eagle Farm track, with jockeys deciding the inside was a no-go zone right from the start of the day.

It then became a contest to see who could get widest on the track.

Sydney trainer John O’Shea even moved to scratch the fancied Mogador because he had drawn barrier one. Stewards denied the request and Mogador stuck to the inside and finished a distant third after going for a bath in betting for the Healy Stakes.

The conditions were amplified in the final event, where easing favourite Tsaritsa was eased to the back of the field from barrier one, as Hugh Bowman wanted no part of the inside.

Damian Browne finished the Queensland carnival with a string of big winners.Source:AAP

Times recorded on the day were consistent with a Soft (6) rating, but the consensus from trainers and jockeys was that it took genuine wet-track horses to win on Saturday.

That all meant little to Schweida and connections of Miss Cover Girl, who finally delivered on her early promise to win a good race.

Damian Browne knocked back several other rides in the race to stick with Miss Cover Girl.

“I thought outside of Azkadellia, it was a very even race and I always thought this mare had a really good race in her,” Browne said. “She’s a horse that hasn’t had a lot of luck and I thought if things went right for her and we could get in the right spot, she could show what she’s really capable of.

“It worked out just perfectly in the run. Coming to the 700 I couldn’t have been happier with the way the race was panning out.

Miss Cover Girl stormed down the outside to win the last Group 1 race of the season.Source:AAP

“In the straight, I just had to wait. I knew she had a short sharp sprint and I just wanted to wait for the right time to use it.”

Two weeks ago, Browne had remarked how it had been a dry carnival, but the feature double at Ipswich last week and now the Group 1 has turned that assessment on its head.