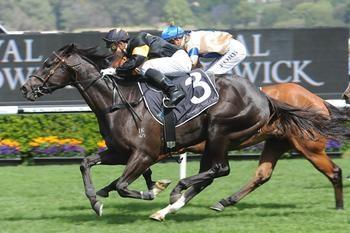 Eagle Farm trainer Kelly Schweida will need to decide whether to proceed further south to a Group 1 target with Better Than Ready after the three-year-old’s record-breaking win in the Listed Brian Crowley Stakes (1200m) at Randwick.

An easy win over 1110 metres at Doomben at his last start on October 1 inspired Schweida to take on the Sydney three-year-olds with Better Than Ready in the Brian Crowley Stakes but the colt reproduced his Brisbane form in Sydney.

The jockey gave Better Than Ready a comfortable run in the second half of the field before the son of More Than Ready sailed home down the middle of the Randwick track to notch his maiden stakes win by a long neck, recording a time of 1:08.10 to lower Northern Meteor’s Randwick 1200-metre record by .22 of a second.

Schweida told the press at Randwick he could send Better Than Ready to Flemington for the Group 1 Coolmore Stud Stakes (1200m) at Flemington on November 6.

"The Coolmore Stud Stakes at Flemington is there in the back our minds," Schweida said. "But he definitely got assistance from the tail wind (to set the track record).

"He has always shown a lot and I think he could be the best I have trained.I would have been more than happy if he could come here and run in the first three.

"The trip was a learning curve looking to the future."