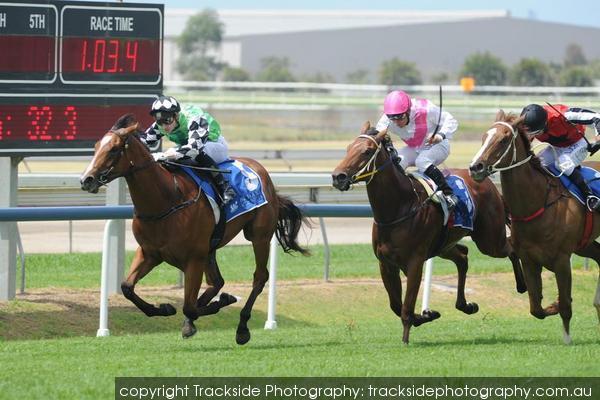 It took two weeks longer than trainer Kelly Schweida would have preferred but Totally Sure's win at Doomben on Saturday has secured the filly a Magic Millions start.

After being held up for a run from the home turn to the 200m, Totally Sure pushed through a narrow gap to win by a length from I'm Alone.

Schweida plans to spell Totally Sure and aim her at the Magic Millions Classic (1200m) at the Gold Coast in January.

"If she wasn't beaten a nose at her first start she would've been in the paddock a fortnight ago," Schweida said.

"We didn't want to be chasing prize money later on but now that she's won the pressure's off and she can have a little break now."

Schweida admitted he was concerned when jockey Ric McMahon was searching for a run aboard Totally Sure, the $1.26 favourite, in the straight.

"She would've been a little bit hesitant today going for the rails run and I did consider putting blinkers on her after her first start but we've been trying to educate her properly without them," he said.

"A month in the paddock now will be ideal for her."

McMahon praised the courage of Totally Sure.

"I was lucky the second horse, being a bit green, shifted ground on the turn and to my filly's credit she took the run and won well," McMahon said.

"She wasn't comfortable racing tight against the fence and it wasn't until she got through there that she knuckled down.

"When she hit the front she put a length on them quickly."