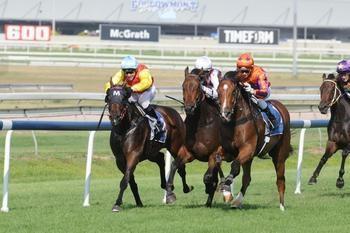 Eagle Farm trainer Kelly Schweida’s decision to drop Viking Heart a few grades in class has paid off after the gelding easily won the Carlton Draught Handicap (1350m) at Doomben.

Viking Heart ran solid races in 1 Metro Win and Class 6 company at his first two starts back from a 21-week spell but Schweida earmarked the Class 3 event as the perfect assignment for the four-year-old.

Schweida booked Kirk Matheson to ride Viking Heart to utilise the young rider’s 2kg claim, bringing the son of Show A Heart’s impost down to 57kg for the $17,000 assignment.

Viking Heart settled at the tail of the field for Matheson but was never more than five lengths from the leader in the eight-horse field.

Matheson waited until the 500 metres before he asked Viking Heart to improve. A slice of luck saved Matheson ground when a wayward runner hung off the track badly on the point of the home turn, allowing Viking Heart a clear passage into the race.

Viking Heart wound up in the early part of the straight to be at his top when the leaders passed the 200 metres. The handy galloper finished too well for his opposition once wound up to score a comfortable one-length win.

The win was Viking Heart’s third from 23 starts but he has now won more than $125,000 for his connections after Schweida paid just $28,000 for him at the 2010 Gold Coast Magic Millions Yearling Sale.