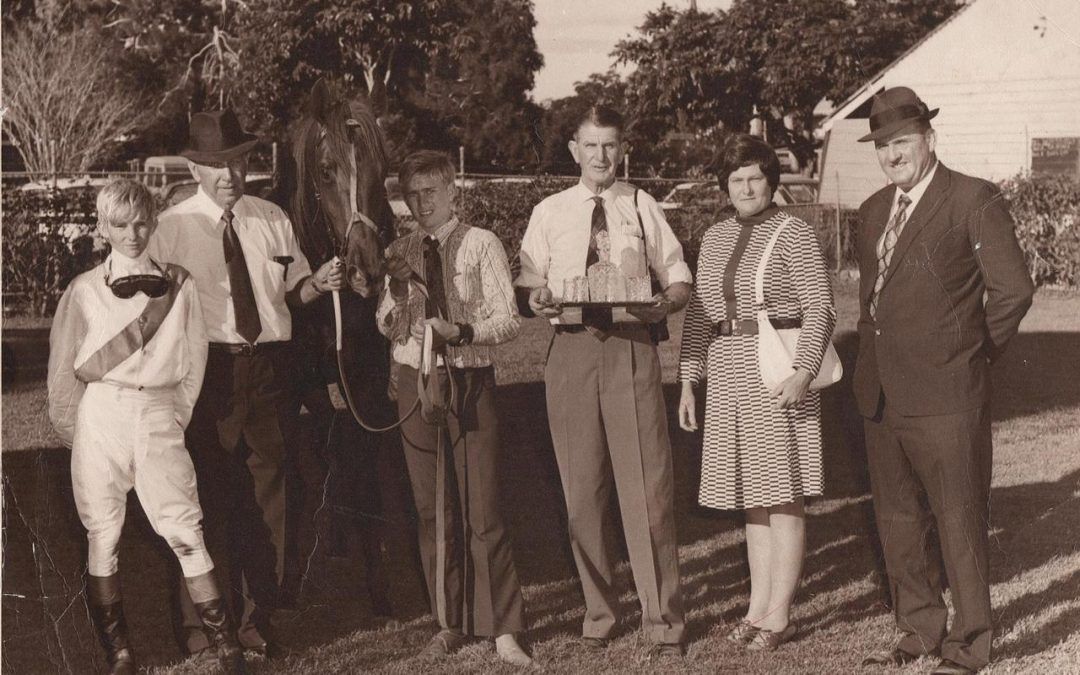 Good to see Kelly Schweida win the first two races at the Sunshine Coast on Saturday, with Bluebrook and Shogun Son. Both horses finished their races off strongly to score authoritative wins.

I was reminded that Kelly went to a lot of trouble to join me on Sky’s “Inside Racing” a few years ago, flying to and from Brisbane on the same day. I was interested to learn that his forefathers emigrated from Germany several generations ago, and his surname has aroused a great deal of curiosity throughout his life.

Despite the absence of racing in his background, young Schweida was sufficiently smitten to become indentured to respected Townsville trainer Les McLellan in 1972. “He was a great horseman and a wise mentor, and I think his influence has remained with me throughout life”, said Schweida. “Stable life was tough back then. I got half a day off once a month, and my first pay packet contained eight dollars. Meals were thrown in, and Mrs. McLennan looked after me like a son.” Jockey K Schweida and on his left trainer Les McLellan celebrate a win at Ayr in the early seventies.

A mare called Rocky Girl holds a special place in Kelly’s heart.She was his first fast gallop, and his very first winner. At that stage of his career, young Schweida tipped the scales at 5st 11lbs or 37 kgs.

A promising young trainer called Brian Mayfield-Smith was based at Cairns in the early 1970’s, and often took horses to Townsville. “He used to stay in an old caravan at the track, and stable his horses on course”, recalled Kelly. “I’m proud to say I rode a winner or two for the man destined to reach the big time in Sydney.”

Kelly Schweida left his mark as an apprentice jockey, winning 150 races and 3 Townsville Apprentice’s premierships. He was just 18 when a near fatal car accident, terminated his riding career, and almost terminated his life. ‘I was in Innisfail to ride a horse called Nipalong in the Innisfail Cup”, recalled Kelly. “A trainer friend asked me to drive to Cairns just one hour away, to gallop a horse for him one morning, and I was a victim of the dreaded micro sleep’.

As his new Mazda 808 coupe rolled, it crushed his right arm which had extended out of the open driver’s window. His arm was badly damaged, and Doctors were initially doubtful that they could save it, but the prognosis improved day by day. Kelly had to wear a plaster cast for one full year, but was grateful his fate hadn’t been worse. “To rub salt into the wounds, Nipalong won the Innisfail Cup with a replacement jockey”, lamented Kel.

Kelly Schweida’s training career began in Townsville, where for several years he worked a small team of horses before reporting for duty as a storeman at the Dept. Of Defence. He and wife Vera had two young daughters at the time, Jodie and Tina who are still valued members of the team.

He trained at Townsville for around thirteen years, winning the premiership in his final season. He’d been “testing the water” in Brisbane for a few years, taking a small team down during the peak of the Northern Queensland summer. Some of his all time favourite horses were around at this time.

One of them was Harvey’s Gold who won 9 races including three in town, but gave his trainer a huge thrill in winning the 1996 Townsville Cup.

Another Schweida favourite was Easy Dancer, a grey entire who had the impressive record of 13 wins and 8 placings from 36 starts. Easy Dancer was by Celestial Dancer, as was Inside Edge, still rated by Schweida as the best he’s trained. Inside Edge won 8 from 13 before a tendon injury halted his career.”He won 6 straight at one stage, and ran a close third to Cohort and Chief De Beers in the BATC Sprint”, reflected Kelly. “He was second emergency in the Stradbroke with only 48 kgs, and I gave him a super chance if he got a run. He missed out, and Rouslan who finished behind him in the BATC Sprint went on to win the Stradbroke”.

Vera Schweida stunned Kelly and the two girls in the early 90’s, when she announced that she wanted to ride in races. “Vera had been a terrific work rider for me, but I never imagined she would want to race ride”, said Kelly looking back on the shock news.”It took a bit of getting used to, but finally we relented and gave her our blessing”.

Vera went on to prove her point, becoming a very competitive jockey.”She won around eighty races, and still dines out on the fact that she beat Mick Dittman a couple of times in town”, said Kelly.

In the year 2000 the trainer was suddenly aware that he was facing an emotional upheaval, and needed to take a complete break before it got the better of him. “I’d been working seven days a week for close to thirty years, and it suddenly caught up with me”, recalled Kelly.” With the support and understanding of our owners, we closed the training operation, and decided on a complete change of direction.

Vera knew she had to get Kelly away from racing, and enlisted the help of her brother who was an established barramundi fisherman in the Gulf country.”And so began the most enlightening few months of my life”, said Schweida. “Vera and I joined my brother in law and his wife, and two deckhands under the most primitive conditions I had ever seen. We lived in an open sided tin hut, which had weld mesh panels in place to keep out the wild pigs and crocodiles. Daily rations of barramundi heads and entrails kept the pigs and crocs happy enough, and we rarely saw them near the shack. What we did have to battle every night, were enormous swarms of mosquitoes. If you happened to get your “mozzy” net off during the night, these mongrels would eat you alive. With every passing day horse training wasn’t looking as tough as I thought it was”.

Kelly has great admiration for the work ethic of the people who fish the rivers of the remote Guf country. “When the barramundi are running they use dinghies to tow the nets, and they stay out until the job’s done. Sometimes they don’t even think of lunch until two or three o’clock in the afternoon”.

When they achieve their quota of 4000 kgs of barramundi fillets, they load them onto a 12 metre long boat with freezer compartments below, and head off on a three hour trip to the Aurukun Mission, 100 kms from Weipa. Here the barramundi consignment is sold to agents, who quickly get it on flights to all parts of Australia. While at Aurukun, the fishermen stock up on food and supplies, which has to last until the next consignment of barramundi is delivered.

After many weeks of total isolation, Kelly was pleased to get back to the horses. He and Vera surprised family, friends and themselves by announcing that they were going to be parents again, and some months later another girl arrived. Samantha is coming up 14, and like her sisters is horse crazy.

Several more nice horses have passed through the Schweida barn, in subsequent years.One of them was Better Than Ready, winner of 8 races from just 16 starts for $485,000. He won four Listed races including the Brian Crowley Stakes at Randwick, bettering Northern Meteor’s track record. Better Than Ready is now stationed at Lyndhurst Stud, and his first crop are yearlings.

Miss Cover Girl was an outstanding race mare for Schweida Racing, posting 8 wins and 9 placings for $848,000. She won the Gr 3 P.J.Bell stakes at Randwick, and the Gr 1 Tatts Tiara at Eagle Farm in 2016. Kelly watched the Tiara on a television monitor at Callaghan Park Rockhampton, where he later completed a unique double by winning the “Rocky” Cup with Ruling Force(13 career wins). Images of Miss Cover Girl and Outraged by Trackside Photography

Kelly thought the world of a mare called Nova Star, a daughter of Iglesia, who won 7 races for $886,300. She came from an impossible position to win the GR 2 Queensland Guineas for Michael Rodd, who was also on board a year later when she won the Gr 2 QTC Cup. Stathi Katsidis partnered Nova Star to win the Listed Silk Stocking, and the Gr 1 Winter Stakes(now the Tiara). With Jim Byrne up, she ran a slashing race for 5th in the 2007 Stradbroke, only 3.2 lengths from the winner Sniper’s Bullet.

Outraged, Top Marc, Plain Magic are just a few others to keep the flag flying for Schweida Racing in recent years.

Kelly marvels at the support he’s had from loyal owners down through the years. Owners like Talbot Heatley who gave him horses to train in Townsville years ago, and still supports the stable at the amazing age of 93. Extreme right is Kelly, fashion conscious as always. On the off side of horse is Talbot Heatley.

Schweida Racing operates from the modern infield complex at Eagle Farm, and despite the woes of the course proper, trainers have the benefit of the A Grass, the B Grass and the American Dirt Circuit. The team currently numbers around 35 horses, and Kelly at age 60 is pretty happy with his lot in life.

By his own admission, the family have to put up with a few of his quirks. He can’t stand a picture hanging off centre on the wall, and he goes berserk if he sees a mat even slightly “skew-whiff” on the floor. He claims to be completely useless at any job, other than training racehorses.

And he absolutely loathes mosquitoes. Vera with Samantha, the baby of the family.