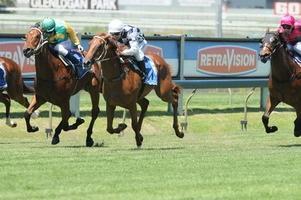 Consistent mare Raise Up made a successful first appearance of 2012 with a fighting win in the Gallopers $1 Membership Handicap (1200m) at Eagle Farm.

Raise Up recorded a win for the third consecutive calendar year with her victory, was her sixth from 38 starts.

Trainer Kelly Schweida earmarked the Benchmark 85 event as the perfect assignment for Raise Up, who had campaigned solidly without winning in the latter part of 2012.

Schweida engaged apprentice Priscilla Schmidt to ride Raise Up, making use of her 1.5kg claim to take Raise Up’s weight down to 52.5kg.

Schmidt restrained Raise Up to her customary position off the pace while a battle for the lead went on, six lengths ahead of the pair, in the early stages.

The jockey pushed Raise Up to improve into the race from the 600 metres to get the daughter of Shovhog within striking distance of the leaders rounding the home turn.

Raise Up wound through her gears in the first half of the straight before she hit her top at the 200 metres.

The handy galloper refused to give in over the concluding stages, enabling Raise Up to fight her way to a narrow, but brave victory.

Raise Up earned a $16,000 winner’s cheque for connections with her terrific performance, taking her earnings to more than $200,000 in a terrific career.