Henry happened to win yet again at Doomben 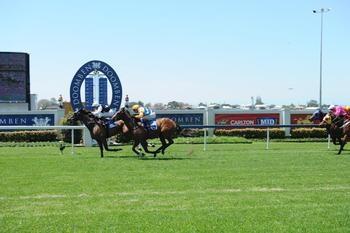 A big weight has failed to stop What Happenedhenry recording the first win of his spring preparation in the Race Zone Handicap (1030m) at Doomben.

What Happenedhenry ran well in two outings in tougher company to start his current campaign before dropping back in class and distance for his latest success.

A 59kg impost was the major drawback of returning to Benchmark 85 grade from open company but the son of Fastnet Rock handled the weight comfortably in the $17,000 event.

Jockey Larry Cassidy stuck with the six-year-old to be aboard What Happenedhenry for the 28thtime.

Cassidy was happy to park What Happenedhenry behind the leader for the first 750 metres before pushing him forward to challenge the front-runner early in the straight.

What Happenedhenry hit the front with 200 metres to travel but the 59kg handicap ensured the runner-up Power Of Ed remained in touch with him over the concluding stages.

However, What Happenedhenry’s class prevailed in the latter part of the race, enabling him to hold Power Of Ed late to win by a half-length.

What Happenedhenry’s latest success was his ninth from 36 starts while the $11,000 winner’s cheque took the stable stalwart’s prizemoney tally to more than $230,000.