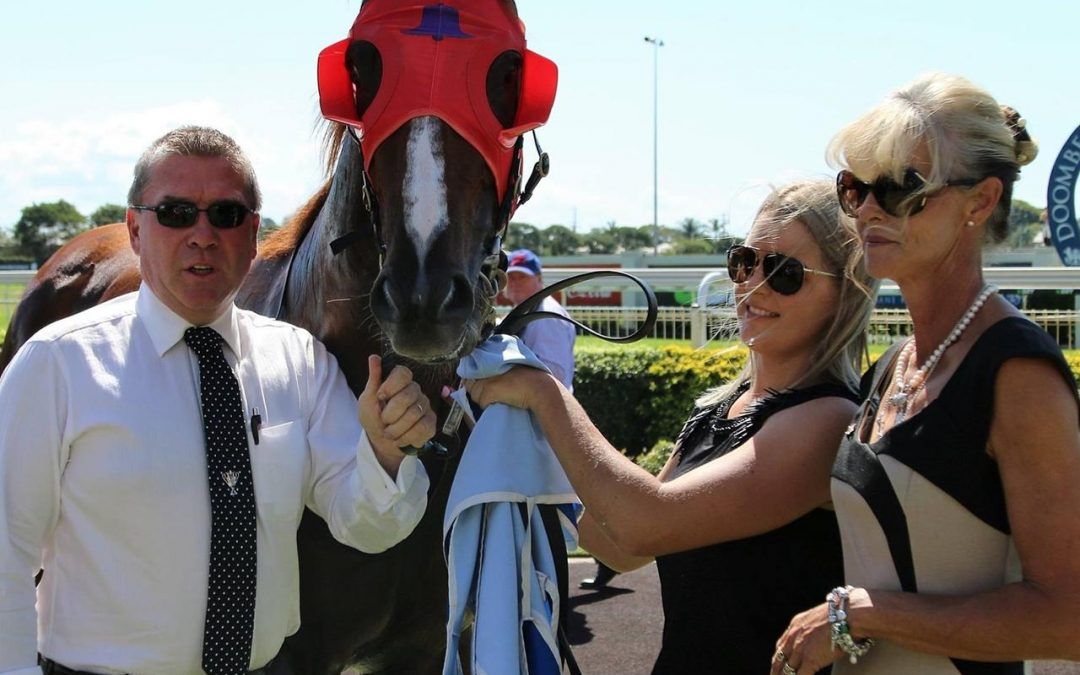 Queenslander Bell was one of the most talented young riders in the country before the 22-year-old was taken too soon in an accidental fall from a high-rise in Singapore in 2015.

Bell’s father Grant is among the owners of Oink, the three-year-old gelding who resumed with an Eagle Farm win last Saturday on what would have been Bell’s 24th birthday.

Grant Bell is a hard-nosed, straight-talking country copper from Narrabri in northern NSW.

He has seen everything in his 29 years in the police force.

But nothing could prepare the police Sergeant for the tragic loss of his son.

Grant Bell and wife Keiley have a lifetime of treasured memories of their boy and they all flood back in even bigger doses every time Oink races.

Strapped by Tim’s partner Heidi Whalley, Oink’s colours commemorate the jockey’s memory as they feature a purple bell on his favourite colour (red).

The horse’s name also has special significance for the family.

“Darren Wilson got us into the horse and the name Oink is partially because he works in the wholesale meat business and owns some piggeries. But it is also because I am a copper,” Grant Bell said.

“Words can’t explain how special this horse is to our family. It is probably a way of us clinching onto all the many things that made Tim so special.

“To be honest, as time goes by, things are probably getting harder rather than easier for us.

“It has got harder as you realise just how good a person he was and how good a jockey he was, and how much he absolutely loved the racing industry.

“His death is something we are never, ever going to recover from.”

In a way, Oink has become part of the healing process for the extended Bell clan.

The jockey’s much-loved girlfriend Heidi, who works for Oink’s trainer Kelly Schweida, says there is a special feeling when the gelding has an upcoming race.

“Every time Oink races, Tim’s parents come and stay with me for the weekend and we get so many texts and so many messages from people,” Heidi says.

“Quite simply, Oink is not like any other horse. It is just as well the poor horse doesn’t know how much pressure he is under every time he races.

“When Oink was bought, the plan was for Tim to ride him at the races. He never got the chance, even though he did ride him in his first jumpout.

“For me, Tim’s death never really gets any easier to cope with. As time goes on, there are always little things here and there that set me off.”

To many onlookers, it appeared Oink must have benefitted from some divine intervention in his return to racing.

Jockey Paul Hammersley, one of Bell’s closest friends, was in trouble at one stage in the straight before the heavens opened and allowed him to surge through a narrow gap.

There was barely a dry eye at Eagle Farm as Oink returned to the winner’s stall.

Schweida, who will now set Oink on a path towards the Queensland Guineas during the Winter Carnival, was one of those who had to dab his eyes.

Bell idolised Schweida and the trainer has wrongly carried a sense of guilt for his part in convincing the young hoop to go on a riding mission to Singapore.

“Tim came and had a coffee with me and I believe I talked him into going to Singapore. That has affected me a lot,” Schweida says.

Grant Bell has nothing but the absolute highest regard for Schweida – “how can he possibly feel guilty, when all he was trying to do was to enhance Tim’s career?” he says.

Bell’s memory will live on and be highlighted every time Oink goes to the races.

His spirit also lives on in the Brisbane jockeys’ room where hoops frequently reminisce on the exploits of the larrikin youngster.

Bell came to prominence in Queensland as a 16-year-old in 2010 when he rode four winners in a day at Doomben.

His star continued to rise when he won the Brisbane premiership in 2013-14 – the same season in which he rode his first Group I winner on Tinto in the Queensland Oaks.

But the boy who started his career riding in the NSW bush is remembered just as much for his playful, fun-loving nature as his fabulous riding exploits.

“Keiley and I were always getting stuck into Tim for being cheeky,” Grant Bell says.

“But he would always tell us he couldn’t just be a quiet kid who sat in the corner, that just wasn’t his personality.

“And I think it was that cheeky nature that people really loved about him.”