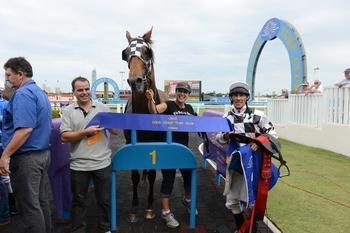 Smart prospect Accidental took a highly-touted scalp in the process of notching his second successive victory at the Gold Coast.

Cheval De Feu went into the Ladies In Racing Magazine Handicap (1200m) with three victories from as many starts to his name but he was no match for Accidental in the $10,000 event.

Accidental notched a win in Class 1 company at Ipswich at his first run for 11 weeks, ensuring he was in fine order for his shot at the unbeaten local.

Chris Whiteley took the ride on Accidental in his latest assignment. A smart early speed prompted Whiteley to position the gelding at the back of the field, with one runner behind him, for the first 800 metres of the event.

Whiteley pushed Accidental to improve passing the 400 metres, switching the son of Choisir to the outside to make his dash for the line.

Accidental sprinted impressively to reel in Destars before the dup swamped Cheval De Feu late with the Kelly Schweida-trained runner having too much momentum for the placegetters as he scored by a long head.

Accidental’s success was his third from eight starts while the $6500 winner’s prize took his stakes tally to more than $30,000 early in his career.